The world of work is in flux: mass unemployment, home-working, zero-hours contracts, modern slavery, and spurious self-employment are all features of the modern western economy. The gender pay gap remains stubbornly present, with women’s overall average earnings well below those of men. Modern-day tensions in the labour market remind us that work is not just a about productivity but meaningfulness, dignity, and freedom. It is not just wages that matter, but types of contract, relationships with employers and co-workers, formal and informal coercion, and unpaid work.

The persistence of gendered occupations and earnings is a reminder of the deep historical roots of many patterns of work. FORMSofLABOUR aims to create a new history of work in the preindustrial economy, the period when waged work first became the dominant form of labour in much of Western Europe. The history of labour and its role in European economic development has been very largely the history of adult men. This project puts other workers in the picture, not simply by ‘adding them on’ but by showing how a full understanding of women’s work and the work of servants (live-in workers employed on long term contracts) offers a radical critique of existing approaches to work in the preindustrial economy. While women and servants are marginal in existing accounts of economic change, they were not marginal in the preindustrial economy.

The existing grand narrative argues that after the end of serfdom in the fifteenth century, the workforce of Western Europe was free, unlike that of Eastern Europe and colonial regions which suffered from serfdom and slavery. Yet the conditions under which women and servants worked were different from those experienced by male household heads. Women and servants were denied some forms of freedom. Studies of slavery and serfdom have moved on from envisaging a binary division between bondage and freedom, towards a sliding scale that recognises a range a features that define levels of unfreedom. These ideas are used here to re-examine the place of women and servants in Europe’s preindustrial economy. FORMSofLABOUR focuses on England within a comparative Western European context, in the period 1300 to 1700.

These issues are investigated through three strands or themes of the project: 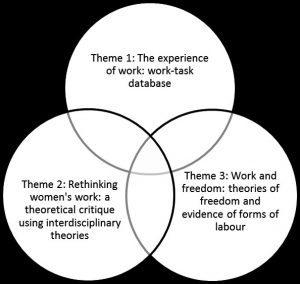 Leading to four sets of outputs:
A = Book on Rethinking Women’s Work in the Preindustrial Economy (theme 2)
B = Book on The Experience of Work in Early Modern England: A Work-Task Approach (theme 1)
C = Edited collection and articles on Service and the Labour Laws (theme 3)
D = Articles on the nature and organisation of work (theme 3)

Jane writes the book on Rethinking Women’s Work. Jane and Mark co-author the book on The Experience of Work with the assistance of Hannah and Taylor. Jane co-edits the collection on Service and the Labour Laws with Thijs Lambrecht of Ghent University. Articles are written by Jane, Hannah and Taylor, including a collaboration with Cristina Prytz of Uppsala University.